How to Catch Giant Pike
By Kevin Geary

I’ve fished with Bob and Kay Polski 2 or 3 weeks a year for the past 5 years. In the spring of O4 on the first day out we worked a reed bed in the back of a long shallow bay. I look for bays with large reed beds, which of course are the dead and brown ones from last year, as the new ones haven’t emerged yet. The weather had been cold since the ice went out 14 days earlier. Water temps were still in the mid 50s in most of the spots we checked. This time of year I look for bays that are less than 6 feet deep for 300 yards or more off the main lake. A southwest exposure is preferred but if a bay is well protected exposure becomes less important. Within that bay there will be an area with a dark bottom commonly called a loonshit bottom. The dark bottom will raise water temperature. A degree or two is enough to make the difference. Even this early if you look at the shoreline you will likely see some green where new grasses and weeds are beginning to emerge. This usually where tiny run off creeks or ground water is making its way to the lake. The ground water being warmer raises the lakes temp at that spot causing accelerated growth. Learn to watch for these green spots, as they will be important throughout the first 5 weeks of the season. Bob was casting yellow bass style spinner bait and Kay was casting a small Johnson silver minnow. I was working a 10” Suik. I’ll bet your thinking it’s impossible to work a Suik in heavy reeds. There’s no doubt that it gets hung up a lot however I try to cast it in open areas and give it one or two pulls before it get hung up then let it float to the surface. Many times there is a foot of water over the tops of the reeds. In that situation it is a simple matter to work the Suik over the tops of the reeds. I use a heavy action (not medium heavy) rod with 50 or 80 lb Power Pro with a 12-inch 100lb test Titanium Leader. If the Suik gets hung up I simply pull it free. Also this beefy outfit helps me pull big pike out of the thick stuff. On occasion it’s not enough and I have to move the boat following the bath that the fish took to unravel the whole mess. There are a number of subtle advantages to this Suik method. First it works and watching a 45-inch pike jump 3 feet out of the water 20 feet from the boat is what makes all of this worthwhile. Also as a guide my first priority is to my guests and my attention is always on them, many times I abandon by bait in mid retrieve. With the Suik even when it’s sitting motionless it’s still doing its job. In addition instructing is a big part of my job and teaching by example is hard to beat. After seeing me let my Suik sit motionless for up to 5 minutes and then have a big pike hit with a vengeance my guests become believers in the technique. One day the week prior I caught 10 pike over 40 inches in less than 2 hours while 2 boats sat 50 yards away soaking a dead bait under a bobber without so much as a nibble. The bobber watchers finally left in disgust. I heard one comment “I guess his TV shows weren’t fake”. 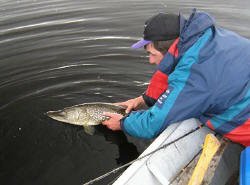 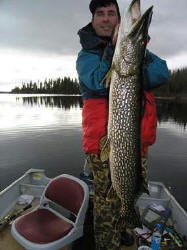 Fish like this are considered a trophy anywhere
in the world”

We caught several 40 inchers then I had a 45 plus jump completely over my Suik twice, nice but not what we wanted. Soon after another 45 plus mad a slashing mouth agape charge at my Suik however it passed a good 3 feet ahead of the bait. Power Pro is quite abrasive resistant and I get very few bite offs when using it leaderless when jigging for pike. In this case it was too much and the pike bit the line clean off but as it turned the hooks lodged near its tail. While I couldn’t see the fish I had a good view of the orange Suik zipping through the dark water. I kept my eye on it and told Bob to cast at 9 o’clock from the bow about 50 feet out. As Bob retrieved his spinnerbait, which luckily did not get hung up, I saw the orange Suik turn and head toward Bobs bait. We were rewarded with the sight of a huge set of jaws emerging 6 feet from the boat with a now looking tiny spinnerbait sitting neatly on it’s tongue. Bob had the presence of mind to wait for the fish to turn before gently snugging up on the line and setting the hook into the corner of the fish’s mouth. After a very energetic struggle I slipped a hand behind it’s gill plate and hoisted it in for a quick photo session. Bob clicked a few quick ones of me holding it as I removed his spinnerbait and the Suik lodge in it’s back. Bob wanted to measure what was surely his biggest ever. It beat his 45 incher from a few years back by a full 2 inches but still didn’t equal the Behemoth Kay caught last year. Before starting the photo session with Bob and his biggest pike ever I put the fish back in the water to allow it to breath, as I don’t want to keep a fish out for more than a minute or two. I’ve done this thousands of times but this time my advancing years and the incredible strength of the fish combined with the leverage it gained as it’s full body coiled against the side of the boat and I realized that Bobs fish of a lifetime was leaving – now!! I told bob the good news was that we had an excellent photo of me with the fish he had searched 15 years to catch. Bob took it all in good humor remarking how at least he would be saving on the tip this week. Luckily it was the first evening and we had 7 days to catch another fish of a lifetime. As it turned out I managed to catch several over 45 inches and 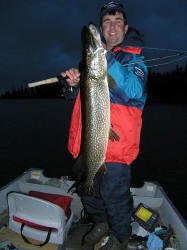 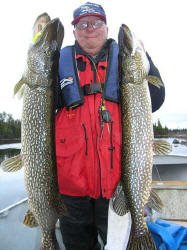 These two were just one of several doubles we had with
large pike – not to worry they were all released.

Bob hooked into a couple of equally impressive fish but was unable to land another of that length. Bob caught and released dozens of 40 inch fish muttering about the lack of any over 46 inches I remarked several times during the week how just a few years earlier he had been thrilled by anything approaching 40 inches. I guess the size of trophy pike is relative to how many you’ve caught. I’ve always considered anything over 40 inches as a trophy for most people. Anything over 50 inches is the fish of a lifetime for most people the exception being those of us fortunate to do this day in and day out. I’ve often been asked if I ever get tire of fishing and I respond that I’ve often been tired by fishing.

As the week continued with Bob and Kay many of the spots that we usually fished in years past were not as productive. The lake must be getting fished out right?? Not likely most of these fish are never even caught once in their lives. The water level was above normal at ice out and the weather stayed cold and wet. (as it turned out the entire summer was unusually cold and wet) I began to realize that 2004 would be different and fish would not be in the same spots at the same times as in previous years. Throughout 04 I met many people who remarked how the fishing had been slower than usual. I in fact had above average fishing throughout the summer. I believe that was due partly to my attention to natures calendar rather than the calendar on the wall. 2004 was a dramatic example of not expecting the fish to be at x spot on x date because they were here last year. Becoming attuned to the rythms of nature is difficult to learn by reading articles such as this it is best learned by paying attention to what is happening around you each day you spend in the great outdoors. When you enjoy success at x spot make either a mental or written note of why those fish are in this spot. Are the shiners, walleye or perch spawning?? Pay attention to when the dragon flies, ducks, mayflies or yellow butteflies hatch. Think of big pike like bears who are opportunistic feeders at times feeding on suckers, grass, blue berries etc. The pike are also influenced by by what their prey are feeding on. Walleye can be likened to birds which may be feeding on blueberries, pincherries, crabapples etc. as the season progresses. The more you add to your arsenal of fishing knowledge the fewer days you’ll return less than thrilled from a day of fishing. 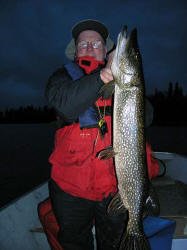 Catching big pike at night would be classified
as uncharacteristic 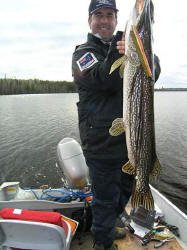 This is all Bob has to remember his biggest ever –
I look okay though don’t I ??

More specifically it took less than a day for me to realize that our “regular “ spots were not going to produce and find productive areas. The following evening we watched a bunch of fins in the rocks above a rapids. While it should have been suckers at that time of year suckers spawn mostly during mid day. They could be in there eating walleye eggs but why were they so active in the evening? A quick check with a spotlight at twilight revealed the obvious – they were walleye. With the extended cold weather the water had remained in the low 50s and the walleye hadn’t finished spawning. Before long a big pike grabbed Kays jig and Bobs as well. Four fish on four casts with a Suik confirmed that a bunch of Big pike had congregated above the rapids in search of an easy meal. For the remainder of the week during the day it was slow going on artificials and Bob and Kay preferred not to use dead bait. However as each evening approached the male walleye moved in to prepare a nest in hopes of attracting a female of course not far behind were predatory pike. The lack of reeds made it easier to work the Suiks and after I caught several over 45 inches Bob became convinced and tossed Suiks to the tune of several more 45 inch fish.

So we had a stark contrast of “typical” location for this time period and an extended period of time where this location remained on the list of gotta go hot spots. As well the time of day was out of whack with when Bob and Kay typically enjoyed prime big pike fishing (mid day). Experience, knowledge, flexibility and a willingness to try new avenues resulted in a very satisfactory week. Remind me to tell you the story of what happened the following week. Until then keep your line tight and keep smiling.