When I arrived at camp all the guides told me that there was nothing in the creeks and bays. The next day I went directly to the mouth of a shallow spawning creek. We anchored just inside the tree line out of the wind, as it was very cold and rainy. There were 6 people in the group Jack and Nathan were in my boat. This was the first time that I had fished with them. We immediately started hauling in 16-27 inch walleye as fast as we could drop in our lines and reel the fish in. One of the other boats in the group anchored about 40 yards away the other moved around casting and soon was out of sight. Shortly both boats came over and asked where to fish for big pike. I said “anchor right here beside us”. This received some strange looks and within minutes both motors were whining as they powered across the lake to greener pastures. An hour later one came back, asked how we were doing we told them we had a couple of 40 inch pike and well over 100 walleye a few of which topped 27 inches. They asked where the Borland River was I explained where it was and that it was about a 45 minute drive and off they went. The big pike never really got going however it was raining so hard and we were catching so many fish that nobody in this boat had any desire to go anywhere else. In addition when I had a small pike on my line a big pike grabbed it. I got a good look at that big pike and estimated it at about 54 inches long. I’ve been doing this for a while and I’m pretty good at estimating the length of a fish in the water. It let go before I had a chance to do anything about it but the incident gave me the incentive to stay put. 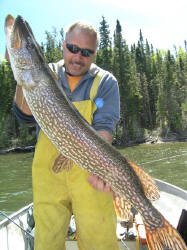 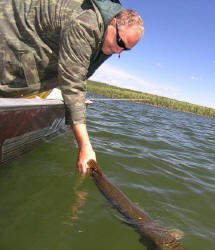 Jack Tilka releasing a trophy so you
and your grandchildren can come
up and catch them also. 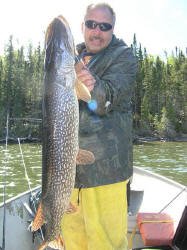 Jack Tilka “I was worn out. By Midday I asked Kevin for a break. We went trolling and caught a bunch more”

The next day we fished the mouth of a small creek near the base of rapids. Water temperature was 52 – 55 degrees. The rapids were loaded with spawning suckers. We anchored in 3 feet of water sideways in the fast water where the pike would have to literally swim under the boat to get to the rapids and the spawning suckers. We caught several high 30 and low 40-inch pike right away and then it got quiet for the next two hours.

This is a situation that really emphasizes the importance of believing in your game plan and sticking to it. My fishing companions had seen our results the day before but were still unsure and making strong suggestions to move and try something else. After 2 hours the pike began to move in. In fact the first fish I saw was almost directly below our boat. It was raining hard with a strong northeast wind blowing directly into our location. Even in 3 feet of water it was difficult to see bottom. What I saw at first was the tail half of a sucker then slowly I made out the outline of the pikes head that surrounded the rest of the suckers body. Soon the place was crawling with water wolves all on the prowl toward the smorgasbord that the suckers represented. Our reward was 6 hours of what most anglers would categorize as unimaginable fishing. Doubles and triples were common. We probably boated 60 big pike. 25 of them would be considered as the fish of a lifetime or at the least a very nice trophy. My camera was acting up and I only managed to get a few pictures. Jack finally asked me to take him back to camp, as he was too tired to catch any more fish.

The majority was caught on jigs tipped with minnows the balance on Suicks and large Rebels. One person would cast while the others worked the jigs directly or almost directly below the boat. Even a few Lake Trout ventured into the shallows for an easy meal and nailed our offering. Both of my companions caught the largest pike of their lives. (Many times over)

The next morning was clear and cold. I was sure that we could repeat the previous days performance. The wind came up out of the northwest and not a cloud in the sky. The pike were shy until noon then started to feed. We could see them moving slowly along the bottom in less than 3 feet of clear water. They wouldn’t come under the boat but the wave action disguised our silhouette enough that would come within 30 feet. I’m sure the lure of so many suckers overpowered their natural wariness. Whenever the wind would quiet down we would move out into about 9 feet where it was difficult to see bottom and the pike would be waiting. Most were caught on jigs tipped with frozen shiner or sucker minnows. Some hit stick baits ( Suicks an Rebels)

By 3pm we were too tired to catch more pike so we went trolling for lake trout, which were still near the surface. We spotted big pike on the graph – suspended over 18 feet on the edge of a large shallow bay where it drops into 45 and eventually 70 feet. Soon we were side tracked hauling in about 15 more beauties including several doubles. We went back to our rapids and the pike were still there. Had to go home everyone was exhausted.

The next day Jack and Nathan wanted to try a different lake. It was raining (as usual) wind was out of the east -remember what I’ve said about the day after the mile high sky? 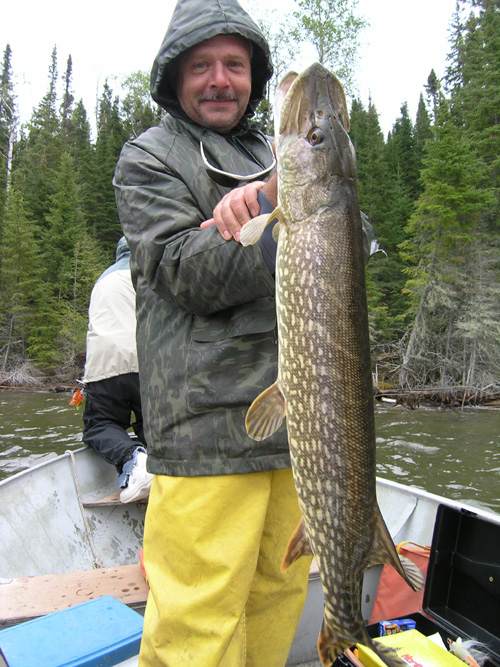 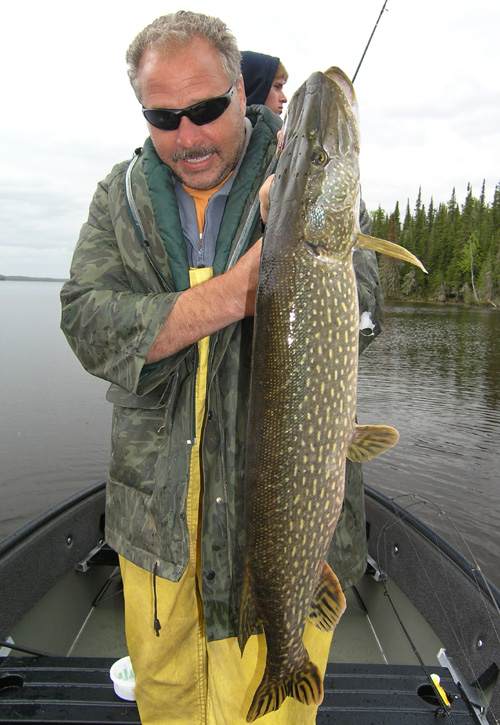 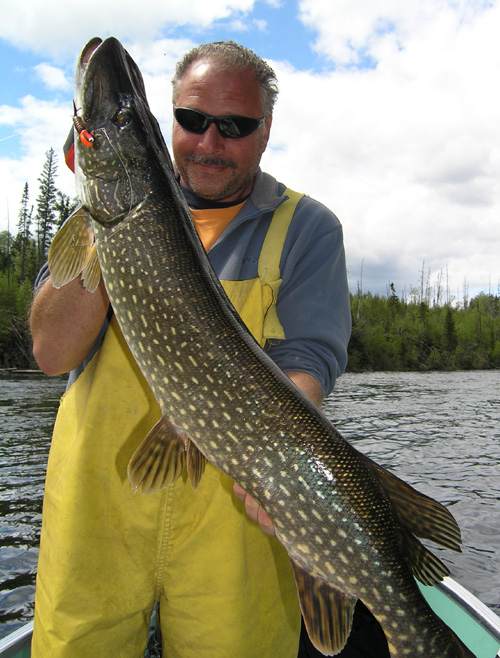 We fished in a shallow bay with a river flowing in from a small spawning lake. Not much current coming out of the creek, which was about 4 feet deep. Billions of shiners were jumping out of the water in what I can only describe as “sprays”. A four-foot high wall of minnows would appear and as those minnows fell back in the water more would be jumping and this wall would expand for 15 -20 yards or more. We could visualize hungry water wolves salivating as they tore through the mass of shiners with toothy mouths agape. We could tell there were a lot of pike feeding on them when we would see sprays in 8 or 10 places simultaneously. The mid sized fish seemed to come in waves while most of the really big pike were caught when it was relatively quiet. Sometimes we would see a spray start and continue in one direction for 40 yards. Sometimes we would see large pike scooting along the surface with there mouths open trying to catch as many shiners as possible.

Obviously if we used a jig and minnow we would have phenomenal competition. Suicks would be the answer. But it took a lot of patience. Most times we would have to cast, give it a few tugs then let our Suick sit for a minute or more before we would get any takers. When they hit they nearly always cleared the water sometimes their entire body would clear the water. We had one come out at a 45-degree angle and come within inches of clearing the gunnel and landing in the boat. We easily had 30 big pike jump out of the water and completely miss our Suicks. We had hits on nearly every cast. We landed many, many Pike.

It was a great day of fishing by any measure. I’m sure if we had simply used the standard spoons and tossed here and there we would have caught very little. In fact all the other groups reported very slow fishing and zero big fish. The key was having the knowledge to find the right location, once there it was obvious that the fish were there. The only other thing necessary was a super slow presentation. Of course we left our spot to see if we could find anything better. This only served to waste a few hours, but we had to know for sure and needed a rest. At any rate I wanted to check on a few cabbage beds to see how soon the cabbage was going to be up. I wanted to know where to start if I came back in a few weeks. July 5th will be hammer time for huge pike on this lake.

The next day we fished a new lake that I’d never fished before. We went to a rapids where the main river flowed in. This is always a safe bet. It was 45 ft deep in lake just outside the river mouth. It was 3-8 feet deep in the river mouth with lots of cabbage emerging. I made a note to try to be here in about 2 weeks when this spot will be incredible. We fished below the rapids caught a bunch of 14 inch walleye. We all knew it was just a matter of time. Sure enough about 3 pm the big pike started, had several Pike grab walleye which we were reeling in. After we had enough fun we left to search the lake and look for future hot spots.

Sounds like a fish story. Most of the guys in camp thought so too until my guests asked me to show them the digital photos. I showed them where and explained how. Some of them went there and did well. However most “hot” spots change day by day even hour by hour. It is difficult to relay to someone all of the things they should look for so they will know they are in the right spot at the right time. Most of the time fishing is an ever-changing event especially in spring. Most “hot” spots don’t stay hot for more than a few days. It all depends on food availability. I think of big Pike as a pack of wolves and they do behave a great deal like a pack of wolves. They’re territorial only as long as the territory has something to hold them – like food or a meal or a snack, maybe some breakfast, lunch or supper and in other instances just something to eat. Got it? The ability to read the signs and know what situation your facing creates confidence in your plan of action. Not all plans will be the right one but eventually you’ll cut down the number of poor plans and increase the number of good ones and maybe develop a few great ones.

Don’t be afraid of those clear cold days after the rain front moves on. You’ll probably get a northwest wind and fishing will be steady and good. The next day will be the slower fishing day. The good news is – you’ve just increased your arsenal of fishing knowledge required for greater success in that situation.